The Constitution, the legal foundation and framework of this country, defined it as “birth citizenship.” Born here, citizen here. Those not born here could become citizens in a variety of ways, but citizenship was intended to be permanent, inviolable unless the citizen decided to deny their citizenship and change to another country. Criminals could be prosecuted, tried, convicted, and punished…but not stripped of their citizenship just because they stole, murdered, set fires, etc.

The only times in our history that this was violated (first with slavery, later with other racist acts and Japanese internment) it was a national scandal *and recognized as such.* Those bad days, I was taught, were over–we’d never make that mistake again.

But it’s happening now. It began as a move by the Texas state government to refuse to issue birth certificates for the children of foreigners (Mexican and Central Americans) born in this country. It continued with the attack of GOP politicians on the concept of “chain migration” (the most common form of immigration in our history–families moved here piecemeal, as they could afford.) And earlier this year I read that the State Department was starting to refuse to issue passports to persons born out of hospital, on the grounds that *even when reported promptly and certified by a state-issued birth certificate*, the place of birth might have been right and the person might not *really* be a citizen.

Worth noting, for those who don’t know: until well into the 20th century *most* births were out of hospital…mostly at home (like my mother, her mother, her mother’s mother, her father, both her grandparents…) In WWII, my mother (born at home) joined nurses in Chicago’s slums to provide birthing service for poor women in their tenements. Post WWII, many rural people (especially rural poor, who could not afford hospital care) had their children at home. When we moved here to central Texas, quite a few people were still having their babies at home, most for financial reasons and a few for the concept of a “natural” birth. Babies born out of a hospital are no more likely to be born in a foreign country than those born in a hospital (for instance, to a pregnant US citizen who misjudged her due date and had her child in London or Bangkok.)

But the GOP paranoia about citizenship, their incredible racism–which would have deported most of their own ancestors and denied citizenship to their children–led to an Administration hell bent on denying citizenship to American citizens and deporting as many as possible. Trump & Sessions both said earlier this year that some naturalized citizens should be deported. This would include people I know who immigrated to this country after WWII, some as adults and some as children. And from day one of the “crackdown” on illegal immigrants, ICE has been arresting, holding, and even deporting *native born American citizens*, with passports, who were not allowed to retrieve their passport to prove citizenship while in detention. Their “crime” was being brown. A man arrested in Colorado was told “You don’t look like you were born here.” (Remember, a Navajo man running for public office was accosted by angry white people telling him “Go back where you came from.”)

And now the State Department is confiscating passports from people born on the Texas-Mexico border (which denies them their proof of citizenship), having them detained by ICE, threatening to deport them. Natural born American citizens. Our fellow citizens. Business owners. Veterans of our military services. Farmers. Citizens who were not only born in this country, but had bothered to get passports (most people in my childhood did not have them; you needed them only for foreign travel, not to prove citizenship.) Citizens–fellow citizens–are informed that they aren’t citizens, really, because of where they live, where they were born.

I’m going to take a wild guess that the State Department isn’t yanking the passports of *white* people born in South Texas…only brown people. Not targeting people with last names like Clark or Miller or Schroeder or Whetzel…but only those with names like Moreno, Rodriguez, Garcia, or Flores. Families whose ancestors were there when Texas (and then the U.S.) annexed the territory, drove them off their land grants, stole their land and their history. Among other things.

I grew up in that border mix, and I experienced the influx of white northerners in the ’50s, ’60s, ’70s–the winter tourists from Iowa, North Dakota, South Dakota, Wisconsin, etc. who complained *endlessly* about the people who lived where they wanted to spend the winter and enjoy the semi-tropical climate, plants, birds, etc. Some of them settled, and brought their attitudes with them. They were offended that our local stop signs also had ALTO on them. They were offended if greeted in Spanish, or if someone’s English had an accent. And there were people like that north of us in all directions. North Texans can be just as snooty and mean as someone from the upper midwest. (My grandfather moved the family to Dallas one year; my mother was harassed and ridiculed because she’d come from the border area; she also had straight black hair, so she was called “dirty Mexican.”) And there’s always been racism in Texas, from the first and all the way to the present.

But seizing the passports–the proof of citizenship–of American citizens without any evidence, declaring them non-citizens without any chance to defend themselves in court, to offer *their* evidence? This is violating our national Constitution and our national honor. And it is also already one floor down the slippery slope to tyranny in this country. Not taxes, not gun control: when the government claims the right to change the rules about who is and who isn’t a citizen–to make that change at the whim of the president or any other individual (or political party) we are already hip deep in Nazi Germany’s determination to “purify” the country–to make it all white and all Christian a certain way. If We the People of the United States don’t stop this right now, this next election, then ANY of us could be declared a non-citizen and our belongings–from passport to land to the clothes on our backs–seized by a lawless government. (Remember the picture of all the rosaries the Border Patrol stole from those they detained: rosaries, wedding rings, family pictures…)

This is not the country I joined the Marines to protect. This is not the country I swore an oath to uphold the Constitution for…not a country that strips citizens of their citizenship on the whim of a political party, or a secret cluster within it, or the senior officials or elected representatives or a president. THIS is a line in the sand, as were the children kidnapped, trafficked, and abused. THIS is NOT OK.

Originally posted by Elizabeth Moon on her Facebook page, August 30, 2018.

U.S. Is Denying Passports to Americans Along the Border

Financier of the American Revolution

Haym Salomon was an American patriot who does not get the attention and respect in the 21st century that he deserves.

By unknown artist – USPS, Public Domain, https://commons.wikimedia.org/w/index.php?curid=2963517, stamp issued by the US Post Office in 1975.

Haym Saloman was born in Leszno, Poland (called Lissa on German maps) in 1740.  He traveled in western Europe as a young man, practicing and studying foreign languages and finance.  In 1775 he emigrated to New York City, where he quickly became a fervent supporter of the cause of independence from England.

He continued his profession in the New World by acting as a financial broker to colonial merchants involved in export and import.  He joined the Sons of Liberty.  He was twice arrested by the British as a spy.

Among his many other contributions to the Colonies, Salomon subscribed heavily to government loans, endorsed notes, gave generously to soldiers, and equipped several military units with his own money. Robert Morris, the superintendent of finance from 1781 to 1784, appointed Salomon as broker to his office. Morris records in his diary that between 1781 and 1784 Salomon lent more than $200,000. In addition, he made private loans to prominent statesmen such as James Madison, Thomas Jefferson, and James Monroe, from whom he would not take interest. In all, the government owed Salomon more than $600,000. Generations of his descendants tried in vain to collect some portion of these loans, which had helped to impoverish Salomon in his last years.  {Encyclopedia Britannica}

While a prisoner of the English, Haym Salomon was required to act as a translator for the Hessian troops.  He also helped American and French POWs escape during this time, and urged the Hessian soldiers to desert.

In 1777 Haym Salomon married Rachel Franks, the daughter of a respected Jewish family, at Shearith Israel Synagogue in New York.  They had four children.

After the second time he was arrested by the English, he was forced to flee for his life, leaving Rachel and Ezekiel behind.  They were eventually reunited in Philadelphia.

In Philadelphia Haym Salomon joined the Mikvah Israel Synagogue, which was founded in 1740, and included many patriots among its congregation.  Salomon and other members of the congregation protested the religious test oath required by the Pennsylvania state constitution for all state office holders.  Although originally intended to disenfranchise Quakers, who cannot take oaths, it also prevented Jews, atheists, agnostics, and those who followed traditional Native American beliefs from being elected to the Pennsylvania State Assembly.  This eventually led to the United States Constitution not requiring a religious oath to hold office.

“I am a Jew; it is my own nation; I do not despair that we shall obtain every other privilege that we aspire to enjoy along with our fellow-citizens.”  Haym Salomon

Why Is Haym Saloman Ignored?

Why doesn’t Haym Saloman have the fame and respect he deserves?  There are three reasons for this.

Haym Salomon died too young, only in his forties,  on January 6, 1785, largely because of health problems he developed as a prisoner of the British.

Claude Rains starred in the Oscar-winning Sons of Liberty, about Haym Salomon.  It won Best Short Subject Film in 1940.  It’s only twenty minutes, in black and white, but if you get a chance to see it, do so. 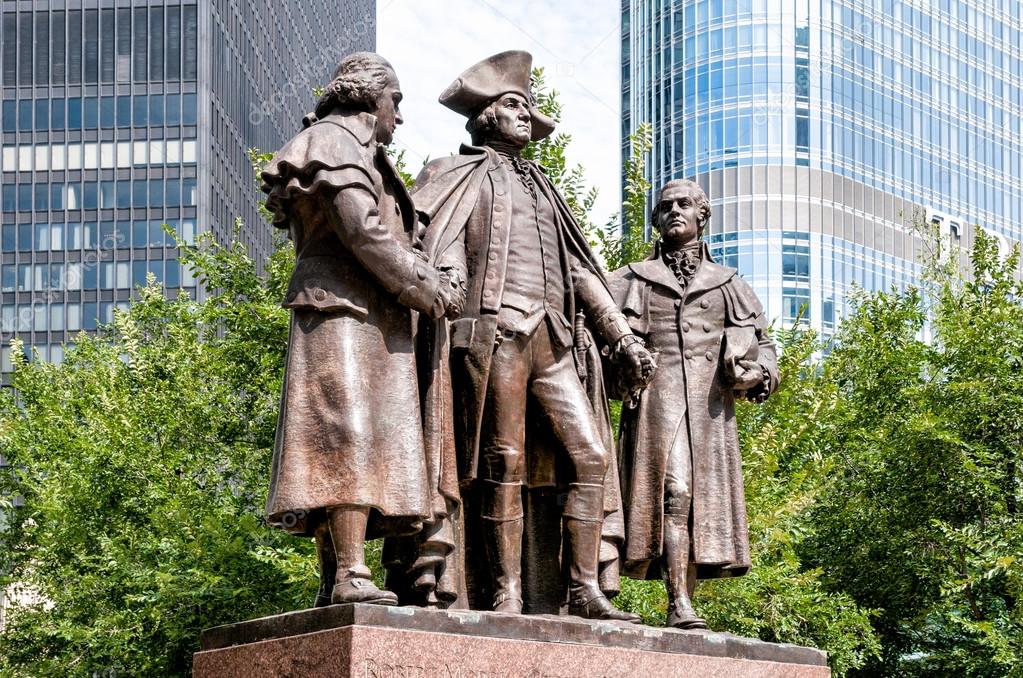