Deerwood Arboretum and Nature Center is a lovely park in Brentwood, Tennessee, and the finest example of “Reduce, Reuse, Recycle” I’ve ever seen outside of an Auntie Litter song.

Deerwood showcases native trees, migratory birds, butterflies and other wildlife. The park features bike paths and jogging trails, ponds, a wildflower meadow and a Nature Center Complex with an outdoor classroom. There are also restrooms, information kiosks and a small amphitheater. An educational curriculum is available for use by schools and service groups.

The bathrooms are clean.  The water fountain works, but is wet rather than cold.

Deerwood Arboretum is also the setting of my current fantasy WIP, “Fair Folk and Foul Folk.”  The park looks like it ought to be home to pixies, dryads, and members of the Seelie Court.  (I did not personally see any such beings, but the park looked like the sort of place they’d enjoy.) When I learned the park was the former site of the Brentwood sewage processing plant, I couldn’t help wondering if any Unseelie creatures lingered.  Did the two groups fight turf wars or politely pretend to ignore each other?  Did they meet at the amphitheater under the full moon and argue by Robert’s Rules of Order? 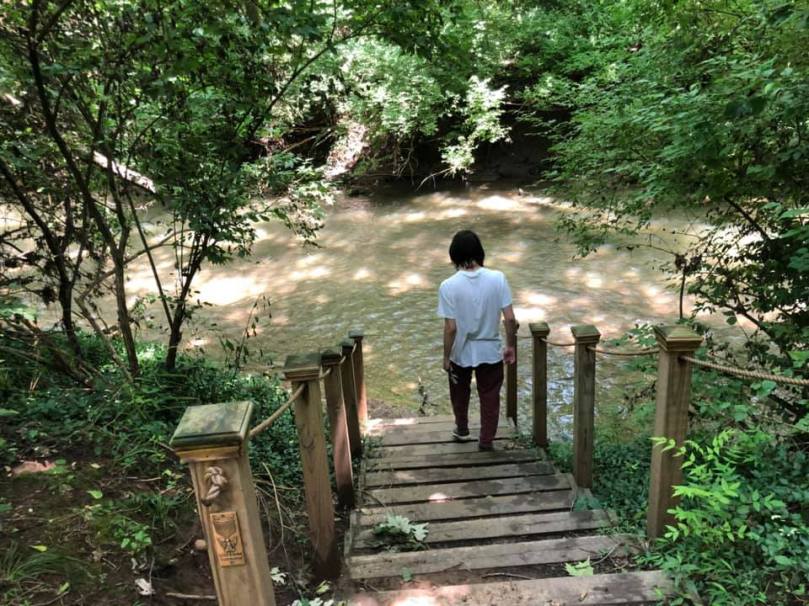 My son Ian at the bottom of the staircase leading to the river.

If you’re concerned about parks becoming sewage centers, you might want to read B Cubed Press‘ Alternative Apocalypses.

If you want me to get a few pennies of royalty money, please buy a copy of Alternative Truths, which contains my Darrell Award-nominated story “As Prophesied of Old.”  Or go to the Medium.com link above and clap for my story.  As you can see in the pictures below, I have medical bills to pay off.  But I’m out of the wheelchair and I’m not dead yet.

Tomorrow is Mother’s Day.  Today was Baby Day at the Memphis Zoo.  To celebrate Mother’s Day weekend, they scheduled several Keeper Chats where visitors could see and learn about baby animals.

A romp of young otters.  Did you know a group of otters is called a romp?

We had lunch at Cathouse Café.  We were slightly disappointed that they changed the pizza recipe.  Edible, but not as good as it used to be.  The zoo restaurant is in what used to be the building for the big cats years ago, and has three food counters:  Sabino’s Memphis Grille, and Pranzo’s.  You used to buy pizza by the slice at Sabino’s.  We did the arithmetic; it was cheaper to buy a whole pizza to feed a family of four.  Now, Pranzo’s does individual pizzas and they aren’t as good as Sabino’s pizza used to be.

The Memphis Zoo is also hosting a Ripley’s Believe It or Not exhibit.  We saw part of it recently, and wanted to go back and see the rest, as well as the accompanying show.  Most of it is odd statuary, like a cheetah made of chicken wire, but there are also optical illusions, shrunken heads, and a Frisbee made of human cremains.

King Kong statue, made of recycled tires, 10 feet tall, weighing nearly a ton.  Made in Thailand.

A statue of Bushman the gorilla, from Lincoln Park Zoo, made of recycled car bumpers.

Dragon made of recycled metal, including household items. 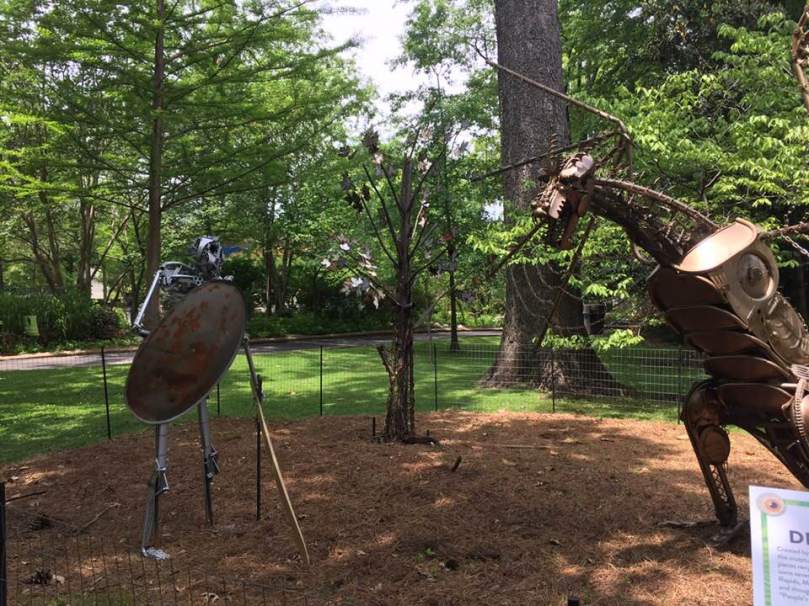 St. George and the dragon.

There was a show where they passed out cardboard fans that said “believe it” on one side and “not” on the other side.  The host of the show showed artifacts and told about them – panda poop, vampire hunting kit, giant spiders, Clever Hans – and asked us to show by our fans whether or not we believed her tale.  Given the heat of the day, the fans were very welcome.  Unfortunately, we had to give them back so they could use them for the next show.

Photo Credits:  Ian Macdonald took the hippo picture.  I took all other pictures.

Magevney House is one of the oldest buildings in Memphis, Tennessee.  It was built in the 1830s and added on to over the years

Eugene Magevney was born in County Fermanagh, Ireland, in 1789.  He immigrated to the United States in 1828 and settled in Memphis, TN, in 1833.  Magevney was a schoolteacher, a civic leader, and a real estate investor.  He died in 1873 in the yellow fever epidemic.  His house is on the National Register of Historic Places.

The house was originally built in hall and parlor style.  There was the parlor, which was the site of the first Roman Catholic mass in Memphis, the first Roman Catholic wedding in Memphis (Eugene and Mary Magevney), and the first Roman Catholic christening in Memphis (Mary Agnes Magevney).  Across the hallway was the hall, originally a multipurpose room, but eventually the master bedroom.  As the family’s budget improved, a dining room and second bedroom were added to the ground floor, a porch to the front, and two bedrooms upstairs.  The upstairs bedrooms were rented out to boarders rather than being used by the family, and are now offices.  The porch was removed when the house was refurbished, so it could look as it did in the 1850s.

The front door and bedroom (hall) window.  The numbers above the door may be too ornate to read.  They say 198, for 198 Adams Avenue.

The piano in the parlor.

The bed in the master bedroom.

The fireplace in the master bedroom, with a decorative firescreen to the left.

Eventually a second bedroom was added behind the hall/master bedroom for daughters Mary and Kate Magevney.  Here’s the bed with two antique dolls.

A rocking horse, somewhat battered with age and loving use.  The horsehair trunk was used by Mrs. Magevney when she emigrated from Ireland.

Eugene Magevney was a schoolteacher.  The chair in the corner was his teacher’s chair, with a drawer under the seat and another smaller drawer under the writing desk attached to the arm of the chair.

The dining room table.  As was the custom in 19th century southern houses, the kitchen was a separate building out back.  It burned down years ago.

The dining room fireplace, with pots and pans in front of it.

The dining room fireplace.  There are candles, a kerosene lamp, and a clock on the mantelpiece.

The back and side view of Magevney House.  On the left is the parlor.  On the right is where the second bedroom and the dining room were added on.

All photographs taken February 16, 2018, by Susan Macdonald.  For better quality pictures, check out this link.