Last weekend my family and I went to the 40th annual Arkansas Scottish Festival at Lyon College in Batesville, Arkansas.  Due to my husband having a crazy work schedule before he was forced into premature retirement, it’s the first time we’ve been in five years.  I would say it’s good to be back, but the weather had an unfortunate effect on the festival..  It wasn’t rained out.  The rain was steady, but never harder than a good Scottish mist.  But there was enough rain, combined with some cool breezes to cancel some events and move others (blessedly!) indoors.

The principal entertainer was Patrick Regan.  Other folksingers performing were Jon Healey and Rickey Pittman.  I was disappointed few of the vendors had musical tapes or CDs for sale.  I know Arkansas is too far for Haggis Rampant or Uncle Hamish and the Hooligans to come, but it would have been nice if their tapes were there, even if they weren’t.  (The picture above is Steve Brownlee, who wasn’t present, but is quite photogenic, if his wife will forgive me saying so.)

I will say the Ramada in Batesville had the nicest handicapped bathroom of any hotel room I’ve used since my stroke. I was able to take any actual soak-bath — my first bath since August! on Friday night and Sunday morning my husband and I showered together.  Glorious!

After waiting a few years for a good Scottish meat pie, I was disappointed to find mediocre meat pies.  The second worse I’ve ever had — most disappointing.  Too much pepper.  My husband and son said the Angus steakburgers were good.  My daughter tried her first haggis and liked it.

Lyon College has pink dogwood trees.  Very pretty before the wind blew all the petals off

Friday night we checked into the Ramada, then went to dinner at Mazzio’s.  Saturday after the festival we went to Freddy’s Steakburgers (it’s similar to Culver’s).  Sunday we ate dinner at home.

We saw more dancing than usual.  The Highland dancers are mostly juvenile.  No one wanted kids to get sick.  So they performed in Brown Chapel, where it was warm and dry.  We watched them, more from a desire for comfort than appreciation of the Terpsichorean art.

We looked at the vendors’ wares.  I made a shopping list and set a budget before we left home and stuck to it.  One t-shirt, and a Celtic cross necklace.  (I had hoped to replace my Boudicca t-shirt, but no one was selling that this year,)  My husband and I compromised on a shirt to share, one that bragged of Scottish heritage.  Had I been buying for myself alone I would have gotten the Wonder Woman shirt.

I had planned to watch the athletics and possibly interview one of the athletes as research for a story I’m writing called “Hot Cocoa and Shortbread.”  I don’t know if the athletics were cancelled or not, but no one wanted to go looking for them in the rain.  I’ll have to do my research on-line.

DISNEY PLEDGES $5 MILLION TO REBUILD NOTRE-DAME DE PARIS, BUT UBISOFT HAS SOMETHING SPECIAL TO GIVE

Seth MacFarlane, Star/Creator Of “The Orville” To Receive Star On The Hollywood Walk Of Fame

My favorite part of a Renaissance Faire is the music.  As Patricia Wrede said, “Music and magic are brother and sister.”

At the third annual Mid-South Renaissance Faire,  we are fortunate in having excellent musicians.

Haggis Rampant is not only one of my favorite RenFaire bands, but they include two of my three favorite pipers, Steve and Gillian Brownlee.  (The third is Eric Rigler of Bad Haggis.) Naturally, with a name like Susan Murrie Macdonald, a member of Clan Murray by birth and Clan Donald by marriage, it’s no surprise I like the bagpipes.

Who are Haggis Rampant?  They’re a bagpipe and bodhrán trio.  They’re a family playing together.  They’re music with an attitude.  And Heaven have mercy, are they loud!

Normally, Haggis Rampant is a trio consisting of father Steve Brownlee and daughter Gillian Brownlee on the bagpipes and mother Pam Brownlee on the drums, both bodhrán and big bass drum.  Daughter Morgan Brownlee sometimes accompanies them; Morgan is a dancer, a drummer, and a fiddler.

They’ve been at the Louisiana Renaissance Festival since 2000, and at the Mid-South Renaissance Faire since 2015.  They have CDs for sale if you want to hear their music, and appear in the ABC book R is for Renaissance Faire if you want a pictorial souvenir.   They also perform at Highland Games, Celtic festivals, music competitions, weddings, funerals, boat christenings, inaugurations, etc.  They did an impromptu performance at the Parthenon in Nashville, TN after the eclipse., which led the crowd of eclipse-watchers into spontaneous dancing.

Steve Brownlee, an award winning piper,  has been playing bagpipes since 1996.  He has a wicked sense of humor, such as playing “Scotland the Brave” as he pipes the actress playing Queen Elizabeth of England to the front gate of the RenFaire, or playing “Rain, Rain, Go Away” during a shower.  (I’ve never heard that song on the bagpipes before, and I probably never will again.)  Pam Brownlee is an award winning bass drummer, who took up playing the bodhrán because accompanying Steve was the easiest way to spend time with her husband.  Gillian Brownlee has been a piper since 2003, when she was only a “wee beastie.” She plays the fiddle as well as the Great Highland Bagpipe, although her competition victories have been as a piper, not a fiddler.  Morgan Brownlee plays bodhrán, tenor drum, and violin, as well as dancing.  She’s won a competition or two herself for her solo drumming.  (What can I say?  They’re a family of overachievers, with talent to spare.)  Their shows include joking and teasing between the family members as well as great music.  Most of their music is traditional, but they do a bit of contemporary now and again.

Their first album, Haggis Rampant (hard to find, may be out of print), is traditional, as is their third album, Trì.  Their second album, Wee Beastie, includes some of Steve’s own compositions as well as traditional Celtic music.  Their fourth album, The Silver Glens, is what they call their “quiet album” (or as quiet as a bagpipe CD can be).  “This album is a different mix for us. We’re usually playing music that makes our audiences want to jump up and shout “Freedom!” This time, to heck with creating energy; we wanted to record the music that stirs our souls.” Their fifth album, Burly!, includes Ken Petrie on the electric guitar and bass for a wild musical extravaganza.  Their sixth album is still in the planning stages, and they’ve not yet announced the theme of it.

If you’re lucky enough be to able to catch one of their performances, by all means do so.  If you live too far away to be able to hear them in person, check out their CDs. Remember, they’re the letter R in my alphabet book R is for Renaissance Faire, autographed copies available for sale at the Mid-South Renaissance Faire, unautographed copies available through Amazon.

There will be a wide variety of music:  blues, bluegrass, gospel, rock, Celtic, and folk.  The park has a very nice playground where the youngsters can burn off some energy. There will be vendors:  Michelle Autry selling Limelight by Alcone makeup and skin care, Linda Piper with Perfectly Posh, Natalie’s Kitchen, Highland Heather Travel (my husband) answering your vacation planning questions, and me, selling R is for Renaissance Faire and Alternative Truths.  One of the food vendors will be selling Irn Bru, a Scottish soda pop which is frankly something of an acquired taste, but one of my husband’s favorite beverages.  There will also be arts and crafts, t-shirts, and CDs for sale.

So head down Hwy. 40, turn north at Exit 108, and come to the Summer Solstice Music Festival in historic Parkers Crossroads, TN.

The other day on Facebook, I saw a video of Emmet Cahill of Celtic Thunder performing the popular folk song “Spanish Lady.” He did an excellent job, as did the woman dancing with him.  The set was beautiful.  The musicians were superb.  What surprised me was that Celtic Thunder asked on their Facebook page “Here is a fun song for you, anyone heard this one before??”  I was even more surprised when several people said it was new to them, or that they had only learned it from Celtic Thunder’s sister-group, Celtic Woman.  Alex Beaton has performed it.  The Dubliners have performed it.  So have the Irish Rovers, Johnny McEvoy, the Kilkennys, the Irish Tenors, the Whistlin’ Donkeys, and too many other musicians to count.  My personal favorite rendition is by George Cavanaugh and his three cousins, Diane, Pam, and Laura.  It’s on their album Ready for the Storm.  The song itself is roughly 300 years old.  Mind you, Emmet Cahill’s version is now my second favorite. 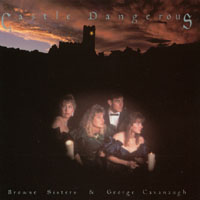 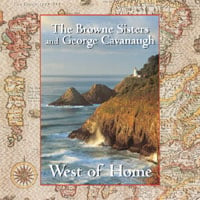 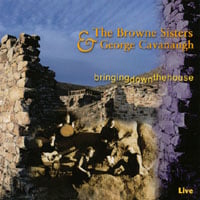 The first time I heard the Browne Sisters in person was at the Orange County Highland Games, in Costa Mesa, CA.  My husband and I were still dating then, and we’ve been married more than twenty years, so we’ve been fans of the Browne Sisters and George Cavanaugh for quite a while now.  They sing a mixture of Irish and Scottish folk songs, mostly traditional, some contemporary.  They sing a few songs in Gaelic.  When I last saw them perform in person, they said they learned the Gaelic songs phonetically, but it’s been a while.  For all I know they’ve learned to speak Gaelic since then.

They have seven albums, which means they have a lot of good songs.  When I listen to “Black and Tan,” I forget that my Irish ancestors were almost all northern Irish and sing along enthusiastically.  “Silver Darlings” is one of their most popular songs and the title song on their first album.  Their versions of “Follow Me Up to Carlow” and “Queen of Argyll” rival the versions by Wild Oats and other bands.  If I absolutely had to choose a favorite, it would be their album Castle Dangerous, which has some of my favorite songs:  “Gypsies in the Wood,” “The Irish Boy,” “The Gallant Forty-Twa,” “Smugglers,” and “Black is the Color.”

The Browne Sisters and George Cavanaugh would be very happy if you bought any of their albums.  They’re available through CD Baby or at any good Highland Games.

Silver Darlings, Castle Dangerous, West of Home, Bringing Down the House, Ready for the Storm, Miles Through the Night, and Christmas Travelers

I would be very happy if you bought any of my books or stories.

Sword and Sorceress #30, containing my story “The Piper’s Wife”  (fantasy)

Photo from the Browne Sisters and George Cavanaugh’s webpage; used with their kind permission.  Tapadh leibh!