Science fiction author Esther Friesner suggested a legion of Handmaidens (from Margaret Atwood’s The Handmaid’s Tale) march in the parade at DragonCon in Atlanta.  I think it’s time to remember Judith and Jael.

When discussing women in the Bible, Esther, Ruth, and Mary get all the attention.  Judith and Jael are overlooked.  If you’re Protestant, you may not have heard of either.  The Book of Judith is in Roman Catholic and Eastern Orthodox Bibles, but is considered noncanonical by Protestants.  Many biblical scholars regard it as the first historical novel. In the Book of Judges, the story of Jael may be found, but as it’s not a “nice” story it’s seldom taught in Sunday school nor preached from pulpits. 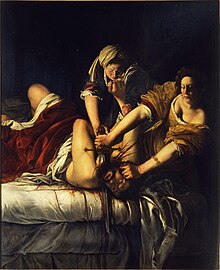 Donatello’s sculpture of Judith and Holofernes.

Judith slew Holofernes and cut off his head.  He was an invading general.  She distracted him and killled him.

Jael gave Sisera food and drink, and once his belly was full and his eyes were closed in slumber, she nailed a giant nail (or tent peg, depending on translation) into his head.  According to the Jewish Women’s Archives, some rabbis think Jael engaged in sexual intercourse with Sisera, and others don’t.  If she did, she may have done so deliberately, to wear him out, so he couldn’t escape and she could safely kill him. Or she may have submitted because she was afraid he would hurt her.  As women have done for centuries.

“Extolled above women be Jael,
Extolled above women in the tent.
He asked for water, she gave him milk;
She brought him cream in a lordly dish.
She stretched forth her hand to the nail,
Her right hand to the workman’s hammer,
And she smote Sisera; she crushed his head,
She crashed through and transfixed his temples.” (Judges 5:24-26)

All illustrations shamelessly “borrowed” from Wikipedia.

It seems human life of the feminine persuasion is less valued than it used to be.  Too many judges and legislators seem to regard women only as living incubators.  Rapists are getting lighter and lighter punishments in court.