First Amendment of the Bill of Rights:  “Congress shall make no law respecting an establishment of religion, or prohibiting the free exercise thereof; or abridging the freedom of speech, or of the press; or the right of the people peaceably to assemble, and to petition the Government for a redress of grievances.”

As I write this, it is Boxing Day/St. Stephen’s Day/Wren Day/the First Day of Kwanzaa.  It is the day after Christmas.  Some people think there is a war on Christmas.  Some people say the United States of America is a Christian nation. Others say it isn’t a Christian nation.  The First Amendment, quoted above, clearly states that “Congress shall make no law respecting an establishment of religion, or prohibiting the free exercise thereof.”  This is generally referred to as the separation of church and state, a phrase used by Thomas Jefferson in his letter to the Danbury Baptists.  But Jefferson wasn’t the source of this idea.  He got the notion from Roger Williams.

“When they have opened a gap in the hedge or wall of separation between the garden of the church and the wilderness of the world, God hath ever broke down the wall itself, removed the candlestick, and made His garden a wilderness, as at this day.”

Roger Williams, as most of us learned in elementary school, was the founder of Rhode Island.  Roger Williams was born in London, circa 1603 (his birth records were destroyed in the Great Fire of London and the exact date is unknown).  He was educated at Cambridge University. Although ordained into the Church of England, he came to believe the church was corrupt and in need of reform.  He also — and this was one of the leading principles of his life — believed the church should be separated from the state.  Even in 2016, Her Majesty Queen Elizabeth II is technically head of the Church of England, and in the 17th century, the ties between monarch and church were far stronger.  At that time the notion of cuius regio, eius religio (that the citizens of a nation should follow the religion of the nation’s ruler) was taken for granted.

Williams became a Puritan.  He and his wife left England and came to Boston in 1631. Continuing his soul-seeking, left the Puritans and became a Baptist for a time. His religious and political opinions affected not only his ability to keep a job, but led to his being convicted of sedition and heresy in 1635.  Banished from Massachusetts, he went to what is now Rhode Island, creating a safe haven for those “distressed of conscience.” His settlement welcomed Christians of various denominations and beliefs, including Baptists, Quakers, Anabaptists, Antinomians, and Jews.Williams knew Anne Marbury Hutchinson and her sister Katherine Marbury Scott and may have been influenced by their religious opinions. (Disclaimer:  Katherine Scott is my ten-times-great-grandmother.  Her son-in-law, Christopher Holder, my nine-times-great-grandfather, was arrested, flogged, and jailed for being a Quaker preacher in a Puritan town.)  Eventually Williams decided not to be affiliated with any church, although he continued his personal quest for becoming closer to God his entire life and was active in preaching and prayer until his death.

“Forced worship stinks in the nostrils of God.”

Williams despised forced worship.  Freedom of religion and freedom of conscience were critical to him; he referred to the attempt of the state to compel belief as “rape of the soul.”  He also believed that a state could and should enforce civil order and justice without being based on Christianity, a belief most of his contemporaries found ludicrous at best and heretical at worst.  Although he had originally intended to be a missionary to the Native Americans, he came to believe that the Native Americans were entitled to their own culture and beliefs.  He firmly believed that the king did not have the right to grant their land to English settlers without their knowledge and consent, and always insisted on paying tribes for their land.

Roger Williams was a clergyman, a writer, a linguist, a merchant, a peacemaker, a philosopher, and a colonial leader.  He and his wife, Mary Bernard Williams, had six children, all of whom were born in North America.  He died in 1683.  Like his contemporary Anne Hutchinson, he was one of the founders of the principles of religious freedom and tolerance in this country.

“The sovereign power of all civil authority is founded in the consent of the people.”

“God is too large to be housed under one roof.”

“There goes many a ship to sea, with many hundred souls in one ship, whose weal and woe is common, and is a true picture of a commonwealth or a human combination or society. It hath fallen out sometimes that Papists, Protestants, Jews, and Turks may be embarked in one ship; upon which supposal I affirm that all the liberty of conscience that ever I pleaded for turns upon these two hinges: that none of the Papists, Protestants, Jews, or Turks be forced to come to the ships prayers or worship, nor be compelled [restrained] from their own particular prayers or worship, if they practice any.”

“That cannot be a true religion that needs carnal weapons to uphold it.”

“It is less hurtful to compel a man to marry someone whom he does not love than to follow a religion in which he does not believe.”

“Men’s consciences ought in no sort to be violated, urged, or constrained.”

First Amendment of the Bill of Rights:  “Congress shall make no law respecting an establishment of religion, or prohibiting the free exercise thereof; or abridging the freedom of speech, or of the press; or the right of the people peaceably to assemble, and to petition the Government for a redress of grievances.” 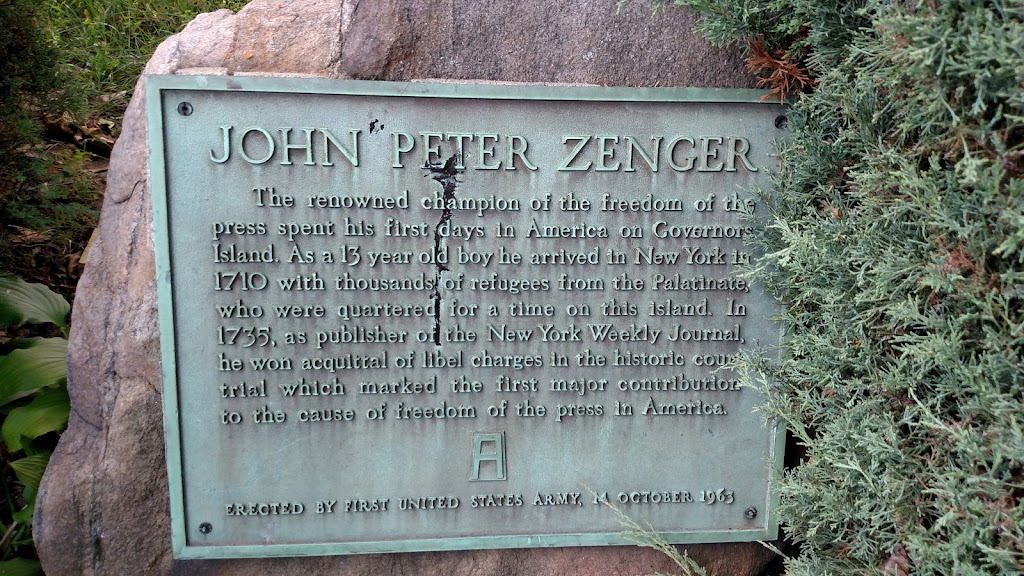 The First Amendment is quite possibly the most important part of the United States Constitution.  It guarantees the right of all American citizens to  believe and worship as they see fit, or to choose not to worship, to speak their minds, to have access to a free press, to gather in groups in public, and to complain to the government.

John Peter Zenger (1697 – 1746) died before the Boston Tea Party and the Battle of Concord, but he is accounted one of our Founding Fathers because he helped established freedom of the press on the soil of this nation.

Born in Germany, Zenger immigrated to New York at the age of 13.  He was apprenticed to printer William Bradford.  In 1726 Zenger began his own printing business, and in 1733, he began publishing the New York Weekly Journal.  He wrote some, not all, of the articles, but as printer, he was legally responsible for the content of the newspaper by the laws of the time.  The New York Weekly Journal printed many complaints against the colonial governor, the very unpopular General William Cosby.

Despite the governor’s orders, a grand jury refused twice to indict Zenger.  November 17, 1734, Zenger was arrested for libel. He was confined in prison for nearly 10 months, before he was brought to trial in August of 1735.  Attorney Andrew Hamilton (no relation to Alexander Hamilton) argued that the jury, not the judge, should determine Zenger’s guilt or innocence.  He argued that as what Zenger had printed was true, it could not be libelous.

The question before the Court and you, Gentlemen of the jury, is not of small or private concern. It is not the cause of one poor printer, nor of New York alone, which you are now trying. No! It may in its consequence affect every free man that lives under a British government on the main of America. It is the best cause. It is the cause of liberty.

The jury acquitted Zenger. He was released from prison the following day, returned to his print shop, and published a widely read account of the trial.

It is important to note that the Zenger case did not establish legal precedent in seditious libel or freedom of the press. Rather, it influenced how people thought about these subjects and led, many decades later, to the protections embodied in the Unites States Constitution, the Bill of Rights and the Sedition Act of 1798. The Zenger case demonstrated the growing independence of the professional Bar and reinforced the role of the jury as a curb on executive power. As Gouverneur Morris said, the Zenger case was, “the germ of American freedom, the morning star of that liberty which subsequently revolutionized America!”

John Peter Zenger continued writing and printing until his death in 1746.

Thomas Jefferson, in a letter to the Marquis de la Fayette, wrote: “The only security of all is in a free press. The force of public opinion cannot be resisted when permitted freely to be expressed. The agitation it produces must be submitted to. It is necessary, to keep the waters pure.” Jefferson considered public education and freedom of the press necessary for the health and survival of the United States, or any free nation.

“The basis of our governments being the opinion of the people, the very first object should be to keep that right; and were it left to me to decide whether we should have a government without newspapers or newspapers without a government, I should not hesitate a moment to prefer the latter. But I should mean that every man should receive those papers and be capable of reading them.”

Read the Constitution.  Read American history.  Know your rights as an American citizen.

I found this very useful for my current project, Damaris in Distress, especially the bits on prefixes and suffixes.

For this week’s blog I’ve gone through my nineteenth-century Burke’s Peerage to compile a list of what I consider to be quintessentially English surnames.

During the years I’ve been writing novels set in Regency England, I have had a habit of giving most of my characters two-syllable British-sounding surnames. For example, my heroes have had names like Wycliff, Radcliff, Sedgewick, Allen, Pembroke, Warwick, Rutledge, and Agar. All of these names were proper British names. My perusal of surnames from nineteenth-century Britain seemed to justify that the most common names in the country, indeed, consisted of two syllables.

I also discovered a proliferation of common prefixes and suffixes of common English surnames. Let’s examine the suffixes first because, in my opinion, they’re…

My church is sponsoring an Advent Word a Day challenge.  The pastor has given us a list of 28 words, one from every day from November 27, the first Sunday of Advent, to December 24, Christmas Eve.  The challenge is to:

Advent, after all, is not just a time for shopping for presents and decorating.  It’s a time for mentally,  emotionally, and spiritually preparing for Christmas.

So far I have posted a picture of Norman Rockwell’s Freedom of Speech painting for freedom, a YouTube link to Peter, Paul, and Mary performing the Hanukkah song “Light One Candle” for light, a photograph of a rainbow over the Isle of Skye for hope, a Tolkien quotation for lost, etc.

December 12 — delight  [Feast Day of Our Lady of Gaudalupe]

The featured image was the meditation photo for the First Sunday of Advent, and was taken by Marcus McAdam.