November 9, 2016, was the 78th anniversary of Kristallnacht, as well as the day Donald J. Trump was declared president-elect of the United States of America.  That makes November 9 a good day to remember that not all Germans were Nazis, and even in the worst of situations, there are people who work to make things better.

Sophie Scholl was such a person.

Sophia Magdalena Scholl was born 9 May 1921 in Forchtenberg am Kocher in northern Baden-Württemberg, Germany.  Her father, Robert Scholl, was the mayor of  Forchtenberg am Kocher. She was the fourth of the six children of Robert and Magdalena Müller Scholl.  Sophie had three sisters and two brothers, and she lived a happy, normal childhood.  When she was nine, her family moved to Ludwigsburg.  They moved to Ulm when she was eleven. When she was  twelve, she joined the Bund Deutscher Mädel (League of German Girls), which was the female auxiliary of the Hitler Youth.  She soon became disappointed in the organization.

As the daughter of a liberal politician, she learned her father and his friends did not always agree with the government.  Sophie enjoyed art.  She met what were called “degenerate” artists, modern artists whose work was frowned upon by the Nazi government.  As she grew older, Sophie, who was raised a devout Lutheran, became interested in theology and philosophy.  She read the sermons of  Cardinal Clemens August Graf von Galen, the Roman Catholic bishop of Münster.

Sophie wanted to attend the University of Munich, where her older brother Hans was a student.  According to German law at the time, Sophie had to work six months in the Reichsarbeitsdienst (National Labor Service) before she could be admitted to the university.  She did not like the paramilitary lifestyle of the National Labor Service, nor the Nazi indoctrination which was such a large part of it.

At the University of Munich, Sophie studied biology and philosophy.  Her brother Hans was the founder of a student group called the White Rose that was opposed to the war and to the Nazi regime.  The White Rose wrote pamphlets and graffiti urging passive resistance to Nazi policies.  Sophie ignored her brother’s protests and joined the White Rose.  As a young woman, she was less suspicious to the  authorities, which made it easier for her to distribute the pamphlets.  The pamphlets had such messages as:

”Nothing is so unworthy of a nation as allowing itself to be governed without opposition by a clique that has yielded to base instinct…Western civilization must defend itself against fascism and offer passive resistance, before the nation’s last young man has given his blood on some battlefield.”

Wehrkraftzersetzung was a crime in the eyes of the Nazis. It means “negatively affecting the fighting forces.” People who expressed doubts about Germany’s chances of winning the war, or about Hitler’s leadership were arrested for Wehrkraftzersetzung.  Robert Scholl was arrested for calling Hitler “God’s scourge” on Germany.  Naturally, the Nazi government disapproved of the White Rose and their writings, and attempted to find them.

February 18, 1943, Sophie, her brother Hans, and their friend Christoph Probst were arrested for distributing anti-war leaflets. They were tried February 21, 1943, and executed February 22, 1943.  Sophie told the judge, “Somebody, after all, had to make a start. What we wrote and said is also believed by many others. They just don’t dare express themselves as we did.”

Although Sophie Scholl is almost unknown in the USA, she is remembered as a martyr and a heroine in Germany and widely respected in Europe.  Scottish folk singer George Donaldson of Celtic Thunder wrote a song about Sophie Scholl called “The White Rose.”  British punk band Zatopeks also recorded a song called “Sophie Scholl” and the French rock band Mickey 3D recorded a song called “La Rose Blanche.”  In Germany there are many schools and streets named in her memory. 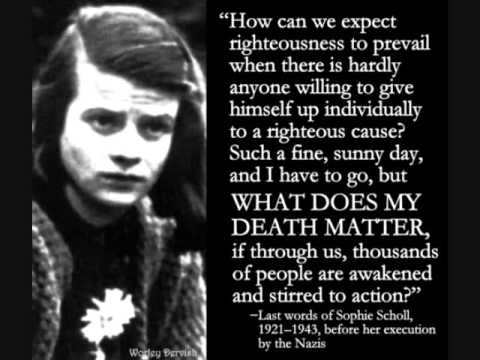 Remember Sophie Scholl, and do what you can to work for peace and justice.